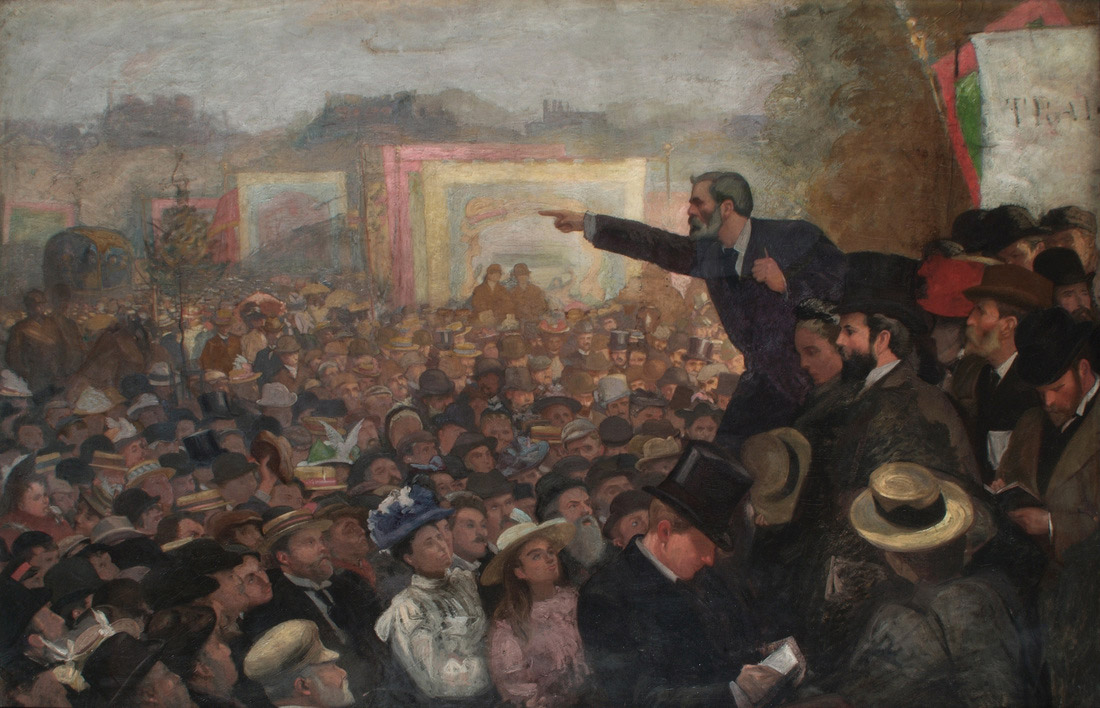 An extract from the booklet 'Builders of the Borough' published in 1994 to mark the centenary of Battersea & Wandsworth TUC set up by John Burns in 1894.

Below is an extract from the booklet 'Builders of the Borough' (click for the full document) published in 1994 to mark the centenary of Battersea & Wandsworth TUC set up by John Burns in 1894.

In 1894 a workers life was cheap. The onset of ever more exploitative forms of capitalism meant that health and safety, security and decent pay came a distant second to the great god of profit. Hungry children, unshod and dressed in rags, were a common sight.

Battersea in 1894 was in deep poverty and many families lived in single rooms. Diphtheria, scarlet fever, measles, whooping cough and diarrhoea claimed hundreds of children that year. In Wandsworth nearly 100 babies under the age of 1 years old died that year even though the Health Inspector claimed that it was a 'good year' because of the mild winter. The riverside housing areas of Battersea and Wandsworth were poorly drained and the water provided by private suppliers was 'often not better than that of the Thames'. This was all a far cry from the days when lavender was grown on Lavender Hill and Wandsworth Common was the edge of the countryside. Battersea's population grew from a mere 6,887 in 1841 to a cramped 150,558 by 1891. Workers came to this area looking for work and the work that they sought was hard and unpredictable. Saturday working and at least 60 hours per week was the norm. In many trades, especially building and on the docks, daily or even hourly hiring was standard. There was no health service, no unemployment pay, and no social services and 'poor relief' meant the workhouse. The average number of births to women born in 1860 was six, of who two could be expected to die before childhood. In Battersea hard manual labour was demanded on the riverside wharves and factories. The engineering work at Nine Elms and the locomotive building and repair yards were no light tasks. Women did heavy work in laundries, packaging factories and Prices Candles. Many women worked, even though keeping a house and childcare was more than a full time job. Times were indeed very hard for working people.

Nevertheless the late 1880's were witness to a mood of rising hope. After three generations of industrial capital, at last, a true weapon seemed to have been found for the working class - the general trade unions. The had burst onto the London scene in a blaze of strike action which included the match girls strike of 1888.

John Burns, who came to prominence as an organiser of the 'new unions', was elected to parliament in 1892 as MP for Battersea. He and Keir Hardie were the first to espouse the cause of labour in the House of Commons

The 'new unions' as they were known, drew on the experience of the old skilled unions, but also bought the power and volatility of mass membership. Battersea was an important focus of 'new unionism'. One of the prominent organisers of the new unions was John Burns, who was elected to parliament in 1892 as a Social Democratic Federation MP for Battersea. He and Keir Hardie (who went onto to lead The Labour Party) were the first to espouse the cause of Labour in the House of Commons. Burns himself a resident of Shaftsbury Park Estate organised gas workers at the large Vauxhall works. He also recruited for the General Rail Workers Union at the nearby Nine Elms goods yard and locomotive works. In 1889 Burns and the Social Democratic Federation were involved in the founding of the Battersea Labour League. The league served as a co-ordinating body between socialist and radical-liberal wings. Four years later in November 1893 the league set up a local trades union body, the 'Battersea Trades and Labour Council', though membership was also extended to political organisations as well. Battersea was one of the first London areas to form a trades union council and its role was described by its founders as 'a permanent organisation constituted upon a democratic basis, and capable of expressing in an authourative manner the wishes and desires of organised workers in this locality. Judging from the early programmes of the trades council, the first priority of the trades union council was not with pay and conditions, but with housing, lighting, food, health and local amenities.

The Borough of Wandsworth Trades and Labour Council was formed on 6 April 1904 by George Wyver and a 'small band' of colleagues whose regular meeting place was the Sailor Prince pub on Earlsfield Road. Wandsworth was geographically larger than Battersea and its population was much more middle-class. Unlike Battersea and its strong socialist radicalism, Wandsworth was a Tory controlled borough. On the many occasions before the merger the two union bodies carried out much joint work. However we know from reports of organisational meetings in Tooting, Balham and Wandsworth, that Wandsworth trades council was active in union expansion after 1909 and Battersea organised a 'Labour Week' in October 1913 for trade union recruitment. The campaign coincided with a three week strike at Garton's in which nine hundred workers joined the Workers Union, the fore runner to the Transport & General Workers Union. The trade unions were on the rise and the popular goal was 'socialism' - nationalised industry and social equality.

GJA & GAP have available to anyone who wants to measure air quality in their workplace or other locations in Wandsw… https://t.co/CVlxkN9uhF

RT @CarveHerName: #OnThisDay, 30 July 1942, Yvonne Rudellat arrives in Nazi-occupied France by boat as a courier for the Special Oper… https://t.co/X647CP4KJO